How to Pack for a Long Backpacking Trip

What to take with you when you leave home to backpack around Europe for a year. 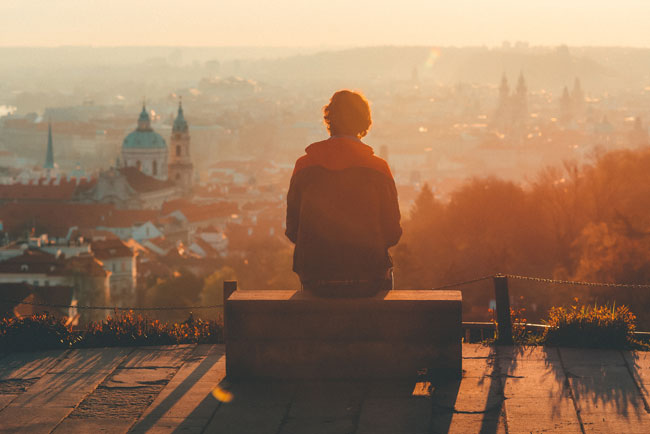 “Are you crazy?” is something that you’ve probably been told at least once by friends or family since you announced your intention to leave your old life behind and travel far, far away for a year.

I know how you’re feeling, because I’ve been there too. Back in 2013 I quit my job and bought a 1-way ticket to Europe. I thought I would only be gone for a year; I ended up spending almost 2 years traveling across the continent, and also visited Morocco, Israel, Jordan, China, and Singapore along the way. If you think that you can spend an extended period of time on the road without running out of clean clothes a few times, or without sleeping somewhere in an airport because you found a stupidly cheap flight from Berlin to Athens that leaves at 6 AM, you’re going to be disappointed.

Backpacking certainly has its joys: discovering beautiful places like San Sebastián, the thrill of kissing a beautiful stranger in a rollicking Berlin nightclub, of making friends for life on a quiet farm in the French countryside. You sacrifice many creature comforts in order to experience those joys. While you can’t expect the same level of predictability and luxury of home, ideally you can pack the essential things that satisfy the bottom tier of Maslow’s hierarchy. You won’t always smell great and you’ll probably get lost along the way, but if you pack these essentials with you, you’ll have an unforgettably amazing time, and that’s what you’ll remember years later. Not the smell (thankfully).

A small satchel or mini-backpack

When you’re settled down somewhere for a week, you won’t want to carry around your mammoth 60 liter backpack with you everywhere you go — that’s a surefire recipe for back pain. Take a small backpack, like the kind you would take to class, or a satchel that’s big enough to fit things like your phone, camera, a snack, map of the city, and a water bottle. You’ll blend in with the locals more this way, which makes you more likely to be stopped by someone to ask for directions (possibly the greatest compliment a traveler can receive) and less likely to be targeted by pickpockets.

It’s unlikely that you’ll be pickpocketed (unless you spend too much time in Barcelona’s La Rambla, then it’s 50/50) or defrauded, but occasionally your primary method of payment will be compromised. If you can’t find your wallet/traveler’s pouch, the first thing you should do is contact your bank and freeze the card so it can’t be abused. Chances are you just misplaced it, so asking them to cancel it straightaway will backfire when you find it 10 minutes after you tear apart your belongings and find your wallet sitting in the pocket of your dirty shorts. If the worst has happened and you’ve been been victimized, having a backup credit card that’s stored in another part of your pack will be a godsend. Nerd Wallet is a trustworthy 3rd party resource for finding a good travel credit card; check em out before you go. Creditcards.com’s Best Travel Reward Credit Cards of 2018 is another handy list for fellow travelers looking to accrue points! Also, if you don’t have a Google Wallet account, sign up for one. Anyone with a US checking account can instantaneously wire you money to your checking account for free.

Duh. For long term (more than three months) travel, most countries require a visa; half of the countries in Europe require you to apply for a Schengen Visa if you plan on staying longer than 90 days out of 180. One way to avoid the need for Schengen Visa if you want to stay in Europe for a year is to plan your trip so that you stay in non-Schengen countries for a corresponding amount of time. For example, spend three months in France, then three months in Serbia. You can try pushing the envelope and overstay, but you might get caught, like I was in 2015, and spend a night in jail and/or pay a fine before being deported 🙁

If you’ve never left North America, you have no reason to know that other regions around the world have different electrical outlets. Well: now you know. The good news is that it’s super, super easy to find places that sell them when you’re abroad. So even if you take a travel adaptor with you and it breaks or you lose it, you can find a cheap replacement. Be prepared though and bring one with you. A universal travel adaptor like the one in Wanderpak’s Mediterranean Backpacker set will cover you whether you’re in Dubrovnik or London — or if you travel to other parts of the world such as Japan or Australia.

The weather forecast is one of many unpredictable elements of travel. Do yourself a favor and invest in a lightweight waterproof jacket. Why lightweight? Because not everywhere that rains is cold — you don’t need an arctic parka if you’re in Europe during the summer. On the other hand, if your stay extends into winter, it’s easy to adapt by wearing a warm sweater and other layers when the temperature drops. Some other handy uses for jackets besides wearing them:

– Detaching the hood and using it as a sleep mask if you’re sleeping somewhere illuminated, such as a hostel dorm or on an overnight flight

– Zipped up and used as a waterproof bag for holding sensitive electronics, or for less sensitive items such as dirty laundry

This sounds almost MacGyver-ish but you never know when you’ll need a spare meter of material to fasten something with. Shoelaces are excellent in a pinch. For example, if you find a really awesome leather jacket at a vintage market in Ghent, you probably won’t have room to pack it. That’s why it’s really useful to have a spare bungee cord or shoelaces to fasten it onto the side of your pack. If you lose your belt or a strap on your backpack breaks, you can use laces as a temporary fix (probably not a good idea to use a bungee cord for a belt though).

It’s such a waste of money and plastic to buy bottled water. Pretty much everywhere you travel in Europe has safe drinking water, so save yourself money in the long run and bring a reusable bottle with you. They don’t cost much and they’re less of a strain on the environment. ‘Nuff said. I like Wanderpak’s BPA-Free Water Bottle, because it’s lightweight, toxin-free, and can clips right onto your backpack.

Chances are slim that your belongings will be stolen from you when you stay at a hostel, but it does happen every so often. Most hostels have lockers, but usually require you to bring your own lock or else rent one for a very expensive fee. Pay a couple bucks and bring your own, that way you give yourself peace of mind when you leave your belongings behind when you go out exploring during the day

It’s pretty much a given that if you spend a year wandering around the world, at some point you’re going to meet someone who wants to get it on with you. The last thing you want to happen as you’re tearing the clothes off each other is you realize you have no protection on you. You don’t need me to remind you (I hope not!) why unprotected sex with a stranger is a bad idea. It’s not that you can’t find proper contraception when you travel — pretty much every pharmacy in Europe carries condoms — it’s that when you hook up with someone, it probably won’t happen when the pharmacy is open. Sure, you can find dispensers on the street and in clubs, but I think it’s smart to carry a pair of them in your wallet or purse whenever you head out at night. If you have a favorite brand it’s a good idea to bring a couple dozen with you so you don’t have to worry about settling for a brand you’ve never heard of when the moment comes.

A towel isn’t as multifaceted as a jacket, but it serves a very important function. If you hit the beach it’ll keep your butt (relatively) sand-free. Some hostels include towels, but many charge extra to rent one. I’m not saying you’ll have the chance to shower every day as you meander around the continent, but when you do get the opportunity to freshen up, take it. Please. A quick tip: Quick-Dry towels are where it’s at.

Nathan Mizrachi thought that traveling for almost two years around Europe would kill his travel bug, but that only made it worse. He makes a living as a freelance marketing consultant, but his passion is flight hacking and travel in general. Nowadays he lives in Portland, Oregon, but he hopes to live in Lisbon one day. Or Berlin. Or Florence (he’s really not sure). If you’d like to work with him, get in touch at nmizrachi1990 [at] gmail [dot] com.